Founded in 1922, Brookwood Hills is one of Atlanta’s earliest suburban neighborhood developments. With its enclave design, curvilinear streets, and variety of architectural styles, Brookwood Hills has retained its 1920’s ambiance and its integrity as a neighborhood as the city has grown increasingly urban around it.

This part of Atlanta had been the site of some of the bloodiest fighting during the Civil War. The Battle of Peachtree Creek, an important engagement of the Battle of Atlanta, began in 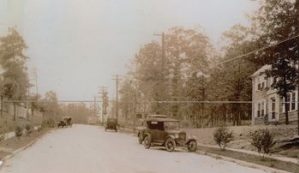 the woods along Brighton Road and spread to the intersection of Brighton and Peachtree and nearby areas. After the War, the city grew north as country estates of some of its leading citizens were built along Peachtree Street. One of the best known of these estates was built by Joseph and Emma Mimms Thompson in the late 1880s near the location of Brookwood Station today. The estate was known as “Brookwood” and gave its name to this part of the city. The Thompsons were outstanding social and business leaders of the city, known particularly for their roles in the Cotton States and International Exposition held in 1895 in Piedmont Park. They entertained Presidents Grover Cleveland and William McKinley and Vice-president Adlai Stevenson at Brookwood in connection with the Fair.

Brookwood Hills was developed in the early 1920s primarily by Benjamin Franklin Burdett (known as “Mr. B.F.”) and his son, Arthur Burdett. The senior Mr. Burdett’s house faced Peachtree Road north of Palisades at that time. His land plus additional property purchased from the Andrew Jackson Collier and the George Washington Collier estates (along with various other parcels) made up what is now the neighborhood.

The Burdetts hired O.F. Kauffman to be the engineer for the new development. Kauffman had worked on the earlier Atlanta neighborhood of Druid Hills in conjunction with Frederick Law Olmsted, America’s premier landscape architect. Olmsted favored a rambling “unplanned” style as opposed to a rigid grid system of streets and lots. Kauffman carried these principles into his design for Brookwood Hills, creating streets that followed the natural terrain, met in wide intersections, and curved through the neighborhood. Oak trees planted along the original streets by Mr. B.F. now meet high overhead to form a leafy canopy in the hot summer months; these trees have become perhaps the most defining characteristic of the neighborhood.

The development of Brookwood Hills took place in four phases: the first phase, beginning in 1921, was comprised of lots on Palisades, Woodcrest, Northwood, and Huntington (to the intersection of Palisades). Most of the lots were sold by the end of 1924. From 1924 to 1930, the second phase was opened: Brighton (the upper part), Montclair, Wakefield, Parkdale, Camden (the upper part), and Huntington from Palisades to Wakefield. These two earliest sections (approximately the areas where there are sidewalks today, except for New Camden Road) were placed on the National Register of Historic Places in 1980 as the Brookwood Hills Historic District.

Life in this new development was somewhat different from today. Early residents told of the trolley car that ran down the center of Peachtree on its way out to Buckhead. Most of the men worked downtown; the women were homemakers and mothers who gardened, played bridge, and did volunteer work. Nearly all the families employed servants, some of whom lived behind the houses in servants’ quarters. These were either garage apartments or separate structures, and several still survive today.

A long row of mailboxes stood at the corner of Brighton and Peachtree, a reflection of the fact that part of the neighborhood was outside the city limits and thus received no home delivery of mail. Not until the mid-1950s were the city limits extended to encompass Buckhead and thereby included the whole of the neighborhood. A reminder of this fact is that Peachtree Street, which was inside the city, becomes Peachtree Road, which was in the county, at the intersection of Palisades Road and Peachtree. By the 1950s, the large houses that had lined this stretch of Peachtree had given way to small stores and filling stations. 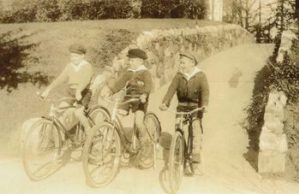 It’s been said that children have always loved this neighborhood. Early young residents enjoyed exploring and building tree forts in the woods behind the developed areas. Mrs. Sadie Burdett, wife of developer Arthur Burdett, told of neighborhood boys discovering a Civil War cannon in the woods behind Huntington. The dead end of Brighton Road, before it was extended for the third phase of development was a perfect place to skate and ride bikes, says Griggs Shaeffer of Camden Road, whose parents were original residents of Brookwood Hills.

One of the most far-sighted moves of the developers during the second phase was to set aside land for recreational purposes. What is today a large pool in the center of the neighborhood was originally a spring-fed lake. In the early 1930s, the Burdetts fenced in the area, hired lifeguards, and charged an admission fee to swim there. Later the residents banded together to build the pool and the bathhouse. The pool, tennis courts, playing field, and woods became a well-known gathering place for generations of Atlanta young people and families.

Due to financial pressures during the Depression, the Burdetts deeded the recreation area, lake, and some unsold lots to Emory University. The recreation area and lake were eventually deeded by Emory to the newly formed corporation, the Brookwood Hills Civic Association, in 1939.

In 1938, the third phase of the neighborhood was developed from land belonging to Elizabeth Collier Thomas, and Mary D. Worley, granddaughters of George Washington Collier, who had owned much of the original land on which the neighborhood was developed. Everett Thomas, husband of Elizabeth, was the developer of this section of the neighborhood. The Thomas family built the house at 152 Brighton, one of the few homes built in Brookwood Hills during the 1930s. In this development, Brighton Road was extended in an arc to meet with Camden Road near the pool, but most of the homes were not built until after World War II. This section is characterized by the absence of both sidewalks and trees planted along the streets that are typical of the first two phases of development. Mr. Thomas later said that he did not feel that sidewalks were needed “because everyone had cars by then”, a reflection of the increasing role that automobiles were playing in American life.

The fourth and last phase of development was a cul-de-sac extension of Camden Road at the foot of Brighton, which is known as “New Camden” today. It was developed beginning in 1961 by John Hall and Ralph Willis on land bought from the Collier heirs. Sidewalks were installed in this section, but the trees that line the streets in the original two sections were not included. 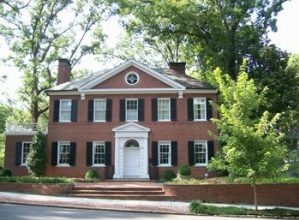 The architecture in each of the phases reflects the styles that were popular when each was developed. Bungalows and various Historical Revival styles typical of the 1920s such as Tudor, Georgian, and Colonial were built in the earliest two phases of development. The third phase has smaller houses reflecting tastes during the Depression and the period following World War II. The fourth phase on New Camden reflects the taste of the 1960s to return to traditional two-story houses.

The Brookwood Hills Civic Association, continuing to the present, has served two purposes over the years since its founding: to operate the pool and recreation facilities, and to protect the neighborhood from the many pressures of the city as it has grown up around the neighborhood.

During the 70-plus years that Brookwood Hills has existed as a neighborhood, the residents, through the Civic Association, have worked with the city, state, and federal governments to insure that growth on the periphery would not destroy the special qualities of the neighborhood. Some of the issues that have affected the neighborhood have involved canceling the city’s plan to continue Palisades Road through to Piedmont Road; the building of the Darlington Apartments north of Brighton Road; the purchase of the property behind Huntington Road between the neighborhood and Clear Creek to serve as a buffer; widening of Interstates 75 and 85 on the south; the repositioning of a MARTA line that was to have destroyed part of the neighborhood; the elimination of an entrance/exit ramp to the Interstate near the neighborhood; and many incursions from businesses on Peachtree.

Brookwood Hills stands as a residential oasis surrounded by the rapidly changing city of Atlanta. In many ways it is an ideal urban neighborhood that reflects neighborhood and architectural design and its evolution for more than 70 years. It is something to be treasured and is worthy of vigorous protection.